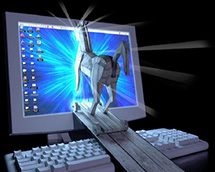 How a Trojan virus penetrates weak computer defenses in the form of a computer virus, which attacks a pc, laptop, network or wireless network, causing all types of computer problems.

Computer users are tricked into downloading or executing the Trojan virus

Which may appear as a legitimate piece of software (or be hidden somewhere within). When you understand the origin of the term Trojan, the idea of a Trojan horse virus makes a lot more sense.

History of the Trojan Horse

The story of the Trojan horse has been around since ancient times. During the Trojan War between the Greeks and the Trojans, the Greeks tricked the Trojans into accepting a fake truce offering in the form of a giant wooden horse, which was taken inside the fortified walls of the city of Troy. Little did the Trojans know that a group of Greek soldiers was hiding within the horse, waiting for the right moment to reveal themselves and allow the rest of the Greek army to penetrate their enemy’s defense.

To avoid extensive damage or risk of a computer security breach, it is imperative to call a qualified professional with experience in Trojan removal as soon as possible after you suspect your computer has been infected with a Trojan horse virus or other computer virus. Trojan virus removal will protect you and your personal, confidential information from falling into the wrong hands.

Why do Criminals Want to Infect My Computer?

Common Signs of a Trojan Virus

Although there are many causes for the computer problems below, such as hardware and software issues, they are often common indicators that a computer virus is present and Trojan horse virus removal may be necessary. Call a professional pc technician from WTG Services at (585) 502-8521 for a complete computer diagnostics test and to remove Trojan viruses.